Flock of Dogs is Made in MA

I've been sick! Apparently, a doctor said, this has been a bad week [for the flu, maybe?]. Anyway, fever's all done, some runny nose/cough issue stuff. Enough about my body! Excited to get back to work! I'm taking Flock of Dogs to an event!

I had to provide a 50 word description:

Flock of Dogs is a 2D co-op game for 2-8 players. With your brother and sister dogriders, and a flying whale, navigate treacherous, procedurally generated skies. Fight on dogback, man stations aboard the whale, locate oases to rehydrate, absorb solar energy, teach your dogs new tricks, and defeat airborne monstrosities.

And a table fee:

And a high-res logo:

Not sure about my logo. It's functional for now. Couldn't decide between male or female rider for a long time. Maybe it would just be better to use the name? Or start promoting the acronym FOD? But I don't have a custom font and I didn't have a lot of time, especially since I was sick.

In terms of work on the game, I was able to do a small amount of work getting the building spawn system to work with the new map and river generating system. That's exciting.
Posted by mclark at 9:09 AM No comments:

I followed a tutorial on the Unity tutorial page to generate caves using cellular automata, the marching squares algorithm, and the flood fill algorithm. This is to make a map structure to encapsulate each level. I can toggle how dense the map fills with walls vs open area, effectively changing it from small chambers and passages to a wide open cavern. Then I  fed in the points along my river, made with Bézier curves, into the passage carving functions to carve out the river, effectively making the cavern/cave structure like a canyon the river is passing through. Within each level, the canyon may split and have separate areas for interesting encounters. Here's some screen shots of the process where I turned off all the other special environmental objects, like watering holes, shops, the castle, the bath house, the dam, etc.

If you can't tell, in the bottom left photo, I forgot to turn off a trigger to spawn a bunch of dudes, so a lot of them just appeared inside the walls or wherever. The bottom right is from the same instance of the game, so you can kinda get a sense of scale.

The other big reason I did this was that creating a mesh is way more optimal than having the million game objects for environment that I had before. I've actually turned the river into a mesh as well, because the river was a bunch of smaller objects laid along the curve. One mesh will be much better. The trouble that has caused is needing to calculate the direction of the current based on the location of the flying units and also the visuals need reworking. I didn't absolutely love the overlapping ellipses, but I thought it was minimalistically pretty.

I also changed the blog to Blog of Flock of Dogs and blogofflockofdogs.blogspot.com, because it's funny. And now, when I type into the address bar "flo..." it autocompletes to my website and if I type in "blo..." it will, I imagine soon, autocomplete to this blog.

Posted by mclark at 4:05 PM No comments:

You probably came from the website to the blog, so that's not surprise for you.

Anyway, a big motivation for creating the website was the possibility of getting to show my game at PAX East. That's a very big deal. There will be tens of thousands of attendees and all the major gaming press. And it wouldn't be acceptable to still be using art stolen from the internet from other games, lol. I really enjoyed drawing all my creatures and creating their digital versions. I definitely improved in using GIMP, which is the biggest, open source competitor with Photoshop. Probably a good skill to have, if I'm to continue in this business.

An big ancillary benefit was the snappy summary written on the home page of the website. It took a fair amount of effort and several friends to help me pack in all the things I wanted to communicate in those two paragraphs. However, now I have a sweet elevator pitch. I had been able to explain my game to you in 5 minutes, but I needed the 5 second version and the 30 second version too. If I do manage to get into PAX, I'll definitely be giving lots of explanations of what my game is and what sets it apart. I'll probably want a lot of other things too, so I'll need to reread some articles on how to prepare for exhibiting your game at a convention.

Meanwhile, as a reward for coming to my blog, here are some secret sprites that I haven't revealed anywhere else yet (well, the tri-legged creature is in the big poster screenshot on the website). 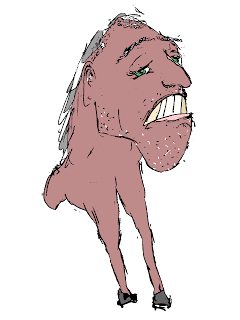 Posted by mclark at 6:53 AM No comments:

Ok! So I'm ready to start showing my game to the world. You know, literally. Because I'm no longer using any Pokemon, Angry Birds, Space Invader, or Adventure Time sprites, so like...I could actually try to create promotional material now. I'm super excited to make gifs.

(I had stopped posting, because it seemed better to spend the time on the game, rather than typing out stuff here. The posts here felt pretty redundant to the notes I regularly write/draw and, since I never told anyone about this blog, I wasn't getting any feedback.)

Here's some new players that I drew (and removed some detail, because at the typical game zoom level, the details muddied the image...might need more simplification, pending game testing): 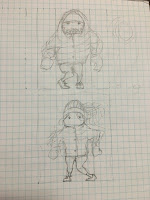 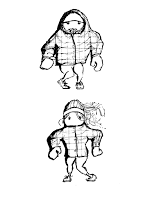 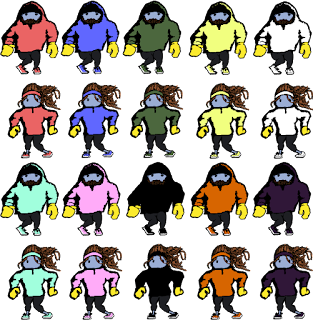 Cool, huh? Unfortunately, my work flow for producing these guys is pretty terrible. Drawing is drawing, then I take photos on my iPhone, then I use GIMP's edge detection, tweak brightness/contrast, increase threshold level, add transparency,  I've watched livestreams and seen tutorials where people have fancier softare or hardware (those Wacam tablets look wonderful), and it looks like magic. Anyway, if I get to the point where I'm committing to making animations, I'll either want to collaborate with an artist or get a tablet/stylus thing.

I've drawn some creatures, mostly at home, but sometimes during Boston FIG talks. So here's some of them after editing in GIMP along with a big duck drawn by my friend, Sarah May (oh and the big tongue dude in the top right was drawn by Ted Larson): 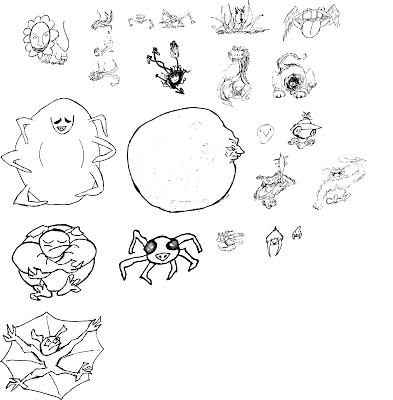 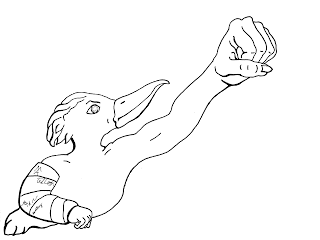 Posted by mclark at 1:54 PM No comments: