Hello, I'm still going. Been busy with a bachelor party weekend (sort of), then a cousin's wedding the next weekend, then July 4th the following weekend, so I don't feel terrible about how I chose to spend my time.

So the game had watering holes randomly distributed across the map. Little clumps of watering holes, really. Then there's little water droplets that spawn in the surrounding area that were hints to the locations of these floating oases. The watering holes shrink as the whale drinks up the water. This has been in the game for a while, but I haven't been in love with it. So I spent a bunch of time coding wiggling waves that faded in and out on top of the watering hole, changed color, and adjusted as watering holes shrank. Then I decided to remove watering holes completely in exchange for rain clouds. It kinda felt like I throw out a bunch of work, which hurt, and while I've heard it said you hafta cut your darlings, I'm pretty happy with the new clouds (which reminds of Happy Cloud, a company I briefly worked for where I was paid to play free-to-play softcore porn MMOs): 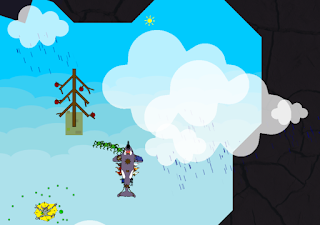 So my issue with rain clouds is that they simply appear randomly, there's no decision making around how to find them or prioritize finding them, at the moment. Also, I'm not sure how I feel about my current method of consuming them, they lerp from a dark grey to a transparent white, less rain falls out, until no rain falls out. My thoughts on design changes are to make some kind of weather forecasting mechanic, where you pay for a forecast and then it shows up on your map, or maybe a weather vane item that you must stop to use that works as a compass for rain clouds. Also, the rain clouds don't move, because I didn't want them to have too much overhead with physics calculations. I make sure to not spawn them in the jet stream, because it seems weird that it's all windy and the clouds aren't being blown along. I'm thinking I may spawn clouds in the jet stream that do get pushed along it. I do like the look of them. I found a basic cloud outline on the internet, filled it in with white. The final edit was to remove its black outline. I don't have a principled way of decided when I want black outlines and when I don't.

Another big thing I've worked on is removing the end of level bosses and instead including beast lairs. The beast lairs provide optional challenges. If you choose to disturb the lair, then you must fight the beast. This will allow for teams to dynamically select difficulty. The rewards for defeating beasts will be linked to unlocking the more difficult routes on the over world map in the Star Fox 64 style I've been planning on imitating for a while now. I'm thinking each level will have a beast lair, or a hitchhiker, or flying cow cattle drive, or some pollution, that the team can opt to deal with as a means of unlocking different routes and experiences. Here's the lair and a beast: 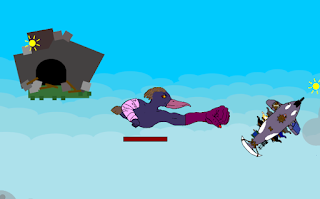 And I've also decided to remove the mesh renderer from the jet stream and use more particle systems to indicate flowing wind. When I was trying to decide how far the trails for the particles should be, how much noise to add to make 'em wiggle, and how fast, I watched some LotZ: Wind Waker videos, heh:

Finally, I paid the exhibitor's fee for a small booth at Play NYC, put on by the Playcrafting organization. I've done a few of Playcrafting's small local events, but this one has promised 5,000 attendees and a bunch of press, like Kotaku, Polygon, and the New York Times. So press has never seen Flock of Dogs before, so that's scary. I got the cheapest option ($400) on the top floor of the venue, and its the first time Playcrafting has done an event of this scale, so we'll see. Driving down to New York is always fun and I have friends there, so even if I'm mostly overlooked, it'll be an adventure. I love adventures! Flock of Dogs is an adventure! ('adventure partner' is like maybe the 2nd most common thing young women put on their list of things they're looking for in a partner on dating apps after 'video game dev').