Work has steadily continued. Here is a screen shot of the game in action: 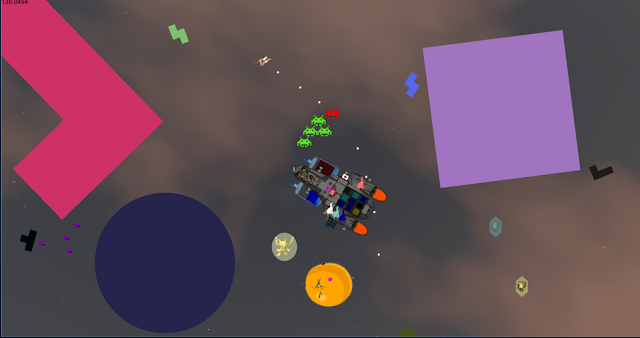 Let me explain what's going on. Big Bird is the ship in the center of the screen. It acts a carrier ship. Players on board Big Bird can man one of several stations or mount a flying Greyhound and undock. There are 4 players active in this game. The white player is riding a Greyhound toward the top of the screen, firing at incoming enemies. The orange player is on board Big Bird, navigating. The teal player and yellow players are in magic bubbles awaiting rescue, since their Greyhounds got destroyed in battle, leaving them stranded. The green space invaders are a basic enemy type. They are attacking Big Bird. The yellow Alakazam is a more complex enemy that has a short range blink ability and a regenerative shield. The orange puff ball enemy turns into a bunch of kamikaze flappy birds upon death. You can see some purple flappy birds on the far left of the screen. The large blue circle is a water source that can refill Big Bird's half depleted water tank. The tetrominoes of various sizes are environmental obstacles. The smaller ones are destructible and, in the future, will leave behind cargo.

Here's a screen shot of a zone or level of the game: 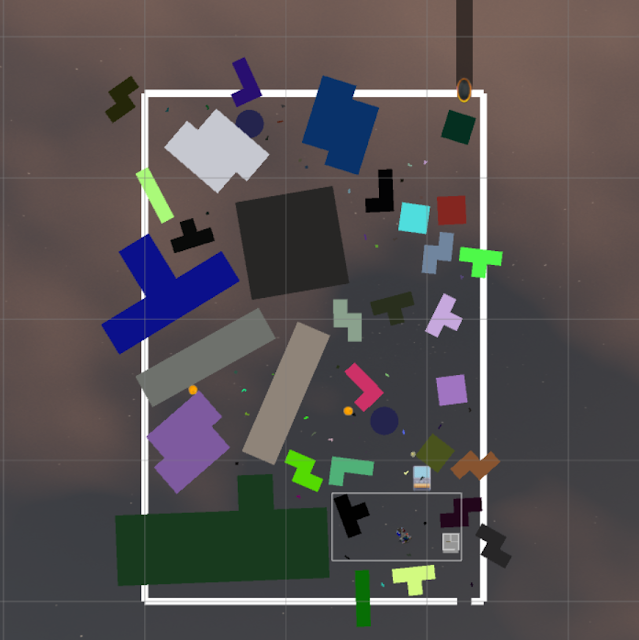 The objective of Big Bird and the flock is to reach the portal at the top right of the zone. There are randomly placed obstacles, enemies, water sources, destructibles, and a shop in the zone. When Big Bird reaches the portal, a new zone will be spawned above and Big Bird continues his journey. The plan is to allow for branching paths to be taken with various zones, each offering different risks, rewards, and gameplay.
Posted by mclark at 11:39 AM No comments: