I can't find the website with the Python script that let me do certain edits on video files in GIMP to create gifs just now, so I used Giphy's thing.

The hints are nice. They go away either after a threshold number of time being displayed or a total threshold of time has passed. I need to structure a tutorial level that would mechanically introduce the game. I sketched out a plan in an email to a colleague, Dave (his game is here devness.itch.io):


Didn't get as much work done on the game as I'd have liked. Mostly just over the weekend. I had an 8 am appointment about an hour away earlier this week. So I had to be up at 6:30 to walk dog and get ready and go. Then, of course, that afternoon I fell asleep for a few hours. Which meant I was then up until like 3 am. And then the next day, I fell asleep in the afternoon and was again up until like 3 am. I should just embrace it and use that time to code, but I end up just sitting in bed watching Twitch or, as it happened this week, 6 episodes of The West Wing, which I've never seen before and it's alright.
Posted by mclark at 1:38 PM No comments:

The BFIG submission deadline was generously pushed back to April 23. So I haven't submitted yet. I haven't changed my video, and I doubt I will, but I'll provide a slightly updated build. Last Friday, I met with the Indie Game Collective. They're a group of indie devs that share a co-working space in Boston. I emailed Ziba Scott, the programmer/designer for Make Sail, becuase I'd played his game at a Boston indies meetup and I saw that they had had a successful crowd funding campaign.

Anyway, I met with Ziba and a few others and they basically told me to not quit my day job. lol. That sounds worse than it is. They were friendly guys and they showed me around their space and gave me soda. They were encouraging about my game itself and how far I had come as a solo first time dev, but they discouraged me from crowd funding. Given that I am working part time and can nearly cover my expenses and could dip into savings/ask family for money, if I really needed to, they thought I should just stick with my current set up, get out a beta, and aim to release in a year. Possibly consdider fixing up the half-game I made, a soccer roguelike, and do a small release on Itch to get some experience with the process and maybe start a portfolio/build community. It all sounds like wise old council. It was very nice to hear they thought I should release the game, which is still a little hard to imagine. They were generally against crowd funding and here's my summary of their arguments: (a) it takes a lot of time, maybe one to two months, (b) it's a crowded space and video games are not doing very well at the moment there, (c) while my art is like quirky and ok, without better art/animation/effects/music, it doesn't seem like my game is as eye-catching as it would need to be to bring in the big bucks. I think these are all very good points they bring up. My biggest counter argument was what do I have to lose (other than 2 months, lol)? But also, why would it take up so much time? And if it did take up that much time, wouldn't I be doing basically the same kind of promotional stuff for releasing a beta or when I simply release the game? Hm. Kinda a Catch-22 with "hey I need money to get cool art and music for my game" and "well, your art and music isn't that cool, so I won't give you money for your game." I have this vision of delivering this off the cuff, passionate Kickstarted video speech that's basically like, "My game's not polished? To heck with polish! If you want a polished local multiplayer experience, go buy Bomberman on the Switch for $60, it's happens to have 34 year old gameplay. And if my game doesn't have some retro pixel animations that remind you of when you were 10, sorry. If you can't cry yourself to sleep with my non existent, not beautifully orchestrated OST, I'm very sorry. If you want a weird game with a different kind of gameplay that provides a shared journey experience, that's what I'm trying to make. And...I guess...fine, I will also say, there are some beautifully polished games out there that have been huge inspriations for my game. But! It's because of their gameplay. In fact, I'd say the polish in Lovers in a Dangerous Spacetime kinda rubs me the wrong way. Overcooked is basically perfect, just no online multiplayer and no level editor. So idk man. If you're rich, you should probably give your money to the poor and if you're poor, well, relationships are really what provides happiness, right? ...but maybe this game can provide a context for community and relationships! wowowow! But seriously, if you're rich, give money to the poor."

So let's talk about reasons to do online multiplayer. (a) I have a very spread out group of friends/family in California, Tennessee, Virginia, New York, Idaho, Washington that I would love to play my game with; (b) most of those people would be my testers; (c) this game is annoying to test alone, it's also tough to consistently organize a group of players to come over and test with me; (d) while Overcooked and Lovers don't offer online mp, I probably would have persuaded 4+ friends to buy those games if it had and, in genreal, the potential sales is a million times bigger with online funcionatliy; (e) Flock of Dogs supports up to 8 players, which is even tougher to coordinate locally, needing all the extra controllers; (f) two of the next three games I fantasize about making would require online mp; (g) if I reach a high level of competency with implementing online mp, if I wanted a job, I think that would really open up options for me; (h) Twitch streamers could play with their viewers, this is a big deal.

I don't know guys. It sounds hard/frustrating. But do you know how smart I am? Hahaha. Maybe this is where I derail myself. I have always loved online multiplayer, because strangers on the internet used to be amazing. And because it's like half as cool as having a LAN party, which have been some of the best experiences of my life. I've spent most of my gaming life playing online multiplayer games, like Starcraft and Halo. I think I'm going to try it. Sharpen up a build for BFIG, get a real tutorial in there, then commit 2 months to online functinoality and see if there's light at the end of that tunnel. And maybe, on a lark, I'll just try a Kickstarter one day. Why not? Sometimes, when you haven't suffered rejection in a few months, you get antsy. But I'm not starving yet.

For the game, this week I just fixed some bugs and added some inventory display stuff.
Posted by mclark at 2:18 PM No comments:

Ok. I'm back. So I've now made my Boston FIG submission video:

I hope they like it. I don't have to send it until midnight on Saturday, so if something seems glaringly terrible to you, let me know ASAP.

I've also shared access to Flock of Dogs Alpha 0.0.1 to folks who wanted to test it out. Although, if that's you and you didn't get the email, it might have gone to your spam folder. That's happened to some people. Since initially sharing the alpha, I've moved up to a new version, 0.0.3. I fixed a few bugs with frame rate independece stuff affecting some enemies movement speed and the helm, but the harpoon still has issues. I added a simple map accessed on the back of the whale by the m-key or Back button. It just let's you scroll thru the whole level. I added a button to heal the whale. And maybe some other small fixes, I don't remember exactly. Anyway, my priority now is to work on online multiplayer and make small fixes to the alpha as I get feedback from testers. Fleshing out features, like adding more environments (there's only one right now lol), more bosses (there's like 2.5 right now), more enemy types, the upgrade systems, and balance issues will take a lower priority.

Posted by mclark at 2:04 PM No comments:

I'm out of town this week vsiting family, so I'm forgiving myself for not getting as much done on the game as I'd like. I had friends over last week and we playtested my game (and a puzzle game my friend is making that you can play a demo of right now). We found several bugs and I've fixed those and also implemented a new version of flying dog reproduction. Here's a screenshot: 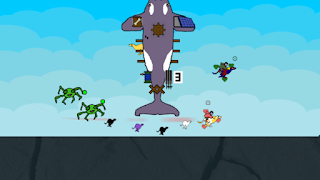 Posted by mclark at 8:44 AM No comments: