A long time ago, I had 4 guns you could equip in Flock of Dogs. The shotgun, the sniper, the battle rifle, the assault rifle, and the pistol. Inspired by Halo, as placeholder weapons. You can see a floating machine gun sprite below: 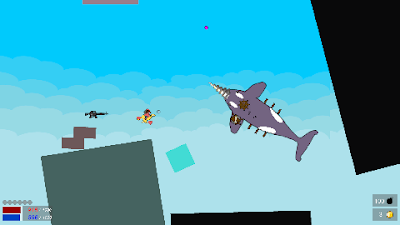 Eventaully, I removed them from the game and limited players to only use what had been the pistol, but with an infinite clip, and then worked on other parts of the game. And over time, I've felt that I wanted to move the focus away from ranged combat for 3 reasons:

1. Ranged wants to keep their enemies across the screen from them, which means that if there's multiple dog riders targetting different enemies, it gets awkward for them to manage their screen space.


So anywayaya. I've made 4 weapons. They are a bow, flail, lance, and shield.

The bow is fairly straightforward now. Initially, I had you manually draw the bow and struggled with the decision of what happens if you do not fully draw your bow: a weak attack or no attack? If a weak attack, how is that visually communicated? Does the bow automatically fire the direction you're aiming, or is there a bit of drag between your actual input and the rotation of the weapon? (that was a decision I had to make for the lance and shield too). Considering that you'll be doing lots and lots of shooting, it would simply be annoying to fail your shots. Which is, in fact, how pretty much every bow works in video games. The idea of a weaker attack, in the context of this game, seems difficult to communicate and unnecssary.

Of course, the first thought for a melee weapon was a sword, which I had actually made a few months ago as an upgrade for the mop, but that may get tossed at this point. I wanted one weapon that wouldn't actually require use of the 2nd thumbstick (aiming). This provides a lower skill floor and a kind of accessibility. The flail fit that perfectly. I experimented with slowing down your movement speed whilst flailing, but it's already somewhat challenging to close in on enemies considering the flail has the shortest range of the current weapons anyway. Plus, what's really the harm in allowing players to be constantly flailing? There may come a time when there's a cost to that, if I decide to implement weapon durability.

The lance delivers a lunge attack if your momentum in the direction of your attack is above a small threshold. Otherwise, it just does a poke. Both attacks can pierce (do damage to multiple enemies). Whereas with the bow I opted not to have a half charged attack option, delivering a well executed attack is everything with the lance and the damage it does matches that. The input is such that if you pull the trigger and hold it, you won't attack until you release. If you just pull and release immediately, your character will complete fully pulling back the lance, and then attacking (thrust/poke). I experimented with just requiring you to charge up the lance fully to do a lunge, and also not having two types of attacks, but rather you just fail to attack if you don't fully charge up. But the idea of flying to the right and then being able to to a lunge thrust backwards, against your momentum, doing full damage, upset the combat realist in me. Currently, I don't check your momentum until the lance has been fully 'charged' or brought back in preparation to strike, which takes like .0625 seconds. I may instead do the check at the time you start 'charging up' your attack, but then I'll hvae to handle the case where you choose to hold the lance in its charged up state. idk.

The shield slows your movement when it's expanded. It also cannot be aimed as quickly when it is expanded. It also delivers a shield bash when it is expanded. Before I had the idea of expanding it, it was very simple, you just moved and aimed. I knew I wanted a shield bash, however, and I didn't want to involve a second button in weapon usage. I didn't want the player's movement to be permanently retarded by just simply having the shield, so the idea of 'wielding it' or 'holding it up' popped into my mind. So that became the unfurling of the shield.

Their visual polish is not complete and there are some systems (upgradability, durability, solar energizability) that I'm considering. At the moment, I'm more interesting in developing these 4 weapons, rather than making a large arsenal to choose from. These could take many forms. What I'm leaning towards is a small weapon rack on board the whale where you can swap out which weapon you're actively using. This would work similarly to how I had harpoons in the game previously, which I may bring back. So at any time, you can hold 1 weapon and 3 harpoons. Maybe. Or maybe harpoons act as another weapon. And maybe you can have 2 weapons at any time. I lean away from upgrades and prefer the idea of using the solar power as temporary power boosts to weapons that perhaps allow for their special attacks. I think this may be the place where I reincorporate my previous features of the replicator shield (a shield that triples your allies shots that pass thru it) and the electric tether (a rope attached between two players that electrocutes the enemy when they cross it).

By durability, I refer to the weapons being breakable/consummable. The idea of durability just ties into the greater design goal of symbiosis of whale, dog, and rider. The whale needs the riders to fight off attacks and the rider needs the whale to hold its weapon stores. However, issues arise when you're (a) out of weapons completely, (b) how to indicate a weapon's current durability hp, (c) when you swap out a half used up weapon for a fresh one at the weapon rack, (d) determining how each weapon loses its durability. I have some soultions for this, but maybe it will just be annoying to have your weapons wear out on you? There's this general concept of the dog and rider pit stop, which I believe is a very big part of the symbiosis experience I'm trying to design. The pit stop goes something like this: dog and rider have been flying around collecting resources, enganging in combat, landing on islands, whatever. Now the dog is low on water, perhaps its lost a few hearts, and the rider's weapon is broken, and there's a ruby the player has just found. So this is a perfect time for a pit stop. The rider can fly back to whale, dock the dog, walk the ruby up to the whale's mouth, grab a new weapon. The dog gets sprayed down, and fed, and takes a brief nap. And then the rider mounts back up and heads back in the blue skies.

My favorite weapon is the lance! Yayaya!