A Unity Editor Script To Automate Building To Windows, Mac, And Linux, And Then Zips Them Up

I set out to write a scipt that would allow me, with one click, to walk away from my computer and it would build my Unity project for Windows, Mac, and Linux, zip up the folders, and put them in my Dropbox folder that I will share with my secret play testers. I have done so.

My script in pseudo code:

I'll present the guts, then, if you're particularly interested, I'll talk through the journey!


NOTE: WARNING: LOOK AT THIS: If you're not used to writing editor scripts, make sure your script is in a folder in your Assets that is titled Editor.


Starting with the import directives / whatever they're called:

Next, basically, a translation of my pseudo code into C# syntax: 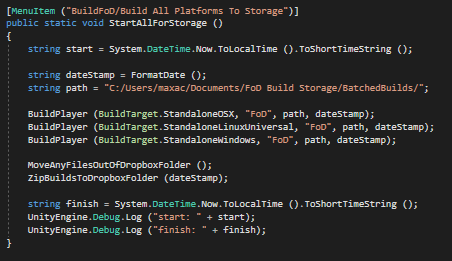 Let's go in order! What does FormatDate() do, you think? It formats the date the way I like it. (It's important that I save the dateStamp string so that I can successfully identify the build folders later when I'm zipping them up.) So here it is: 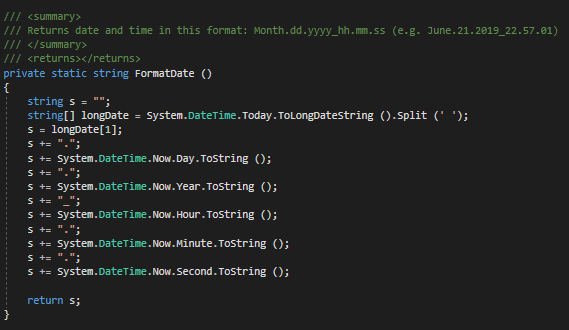 Next, the BuildPlayer() function is basically mimicking the things you have to/can do when you click File->Build from inside the Unity editor: And this is the function that takes forever, because it's where Unity actually builds the project. Each time it switches the active build target, it takes a while, and each time it actually builds the thing, it takes a while. So as you might have guessed, debugging this function is delicate and can take a while. So edit it with care: 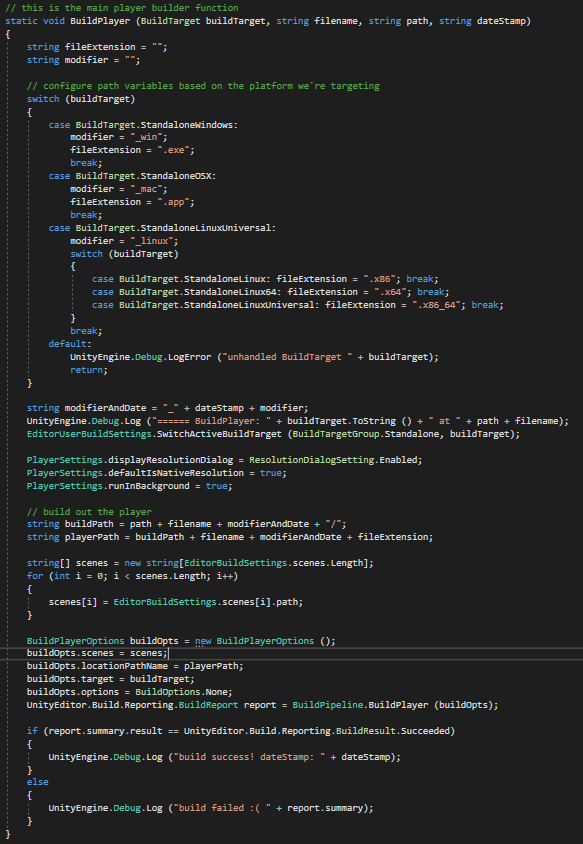 It's a cinch! So, next (if you scroll up and look back at the pseudo code), I want to move anything that's in my Dropbox folder out of the Dropbox folder:

And finally, the zipping function

(THE SECRET TO THE ZIPPING WILL BE COVERED IN THE NEXT BLOG BC IT WAS TRICKY-WICKY-DO. THIS WON'T JUST work FOR MANY USERS)

And for reference, the whole shebang, BuildFlockOfDogs.cs:

Anyway. If you want to now hear about my struggle with zipping, read the next post!